Click on the image or subtitle for more information about each page.

Taking Leave: An American on paternity leave in Japan is more than just a simple description of how American college professor Matthew Apple adapted to his role as stay at home father for a year. The book also delves into social issues influencing Japanese society in the 21st century such as gender roles and responsibilities within the family and the challenges of raising children of mixed parentage to be bilingual and bicultural in a largely (until now) homogenous society. Along the way, Apple examines Japanese holidays and festivals, takes a critical view at Japanese health care, questions the gendering of children’s clothing and toys, describes the negative effects of the Japanese corporate practice of tenkin, or job transfer, and why “womenomics” will be ineffective without an accompanying increase in men participating in child care at home. 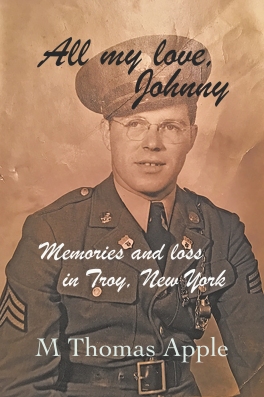 “Little girl you know how I love you and if wishes were any good, I would never have even left you but as soon as I can I’ll be back and we shall be happy again.”

This is the true story of Lieutenant John “Johnny” Hart, Sergeant Allison “Al” Langworthy, and Beatrice “Betty” Connally, caught up in the turmoil and aftermath of the Second World War, as recounted in their family stories, memories, and personal letters from 1940 to 1948.

This page is dedicated to personal essays about various topics…whatever occurs to me, really. The dividing line between “fiction,” “non-fiction,” “creative non-fiction,” and “story” is easily made by English-language literary agents, booksellers, and readers alike…but not by me.

One column even got me over a hundred indignant “you leftie pinko commie we came here to get away from you” emails. A couple more got some fairly aggressive “replies” via Letters to the Editor. After about a semester of this, my advisor became concerned that I wasn’t writing enough fiction to graduate.

See, my attitude was that, if I wanted to be a writer, that I should practice writing all sorts of styles, modes, and genres.

Me, the writin’ rebel. Who knew?