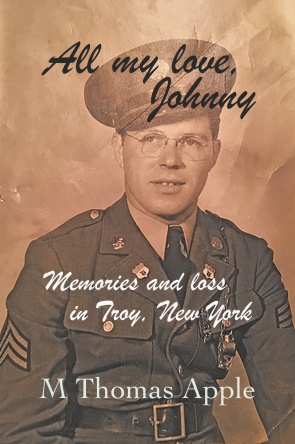 “Little girl you know how I love you and if wishes were any good, I would never have even left you but as soon as I can I’ll be back and we shall be happy again.”

Lt. John Peter Hart, a first-generation German-American from Troy, New York was ready to make the ultimate sacrifice for his country, in Operation Overlord.

Unknown to him, his friend and future wife’s second husband was building bridges and roads along the Apennines in Italy. John Hart’s decision to join up in early 1940 and become an officer sealed the fate of not only himself but also that of three families.

This is the true story of Lieutenant John “Johnny” Hart, Sergeant Allison “Al” Langworthy, and Beatrice “Betty” Connally, caught up in the turmoil and aftermath of the Second World War, as recounted in their family stories, memories, and personal letters from 1940 to 1948.

“Over sixteen million Americans served during World War II and this story offers in rich detail the story of two men in uniform and a woman they both cared about. A story of love and tragedy that is more representative of the experiences of many that served than the ones often told of generals and politicians. A story that needs to be told and remembered.”

“Not only is this a touching and interesting family story, it is a great snap shot of the war and its effects, as well as Trojans and Troy history connection.”

“There is one [exchange] in particular between Al and Betty…that actually moved me to tears…In a single paragraph, the crux of three converging lives and the disparity that puts each at arm’s length is never more profound than when Al writes ‘But to live the past in your mind is dangerous and disastrous.’ This is a book well worth reading.”