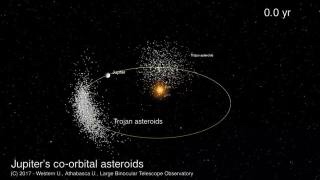 Though discovered nearly four years ago, an asteroid in orbit near Jupiter ( BZ509, or just “bee-zee” for short) is now said to be originally from outside our solar system. The aliens are here (have been here…).It’s a controversial idea that many astronomers disagree with. Unlike ‘Oumuamua which came hurtling towards the Sun at breakneck speeds before being flung back from whence it came, BZ is locked into a retrograde orbit with Jupiter.

Only it’s too old to have done so recently. And if it’s as old (or older than) the rest of the solar system, it should be orbiting in the same direction as everything else.

What’s more, there are 82 other asteroids on similar retrograde orbits. It’s possible they originated in the Oort Cloud, and not from extrasolar sources. But who knows?

I’m a writer, Jim, not an astronomer. Where the scientists see opportunities for journal publications and endless academic arguments, I see storyline possibilities…