From now I’ll be spending some time on the blog briefly explaining the background of some of the stories and poems in my new book Notes from the Nineties (already available for pre-order! Only $1.99!). 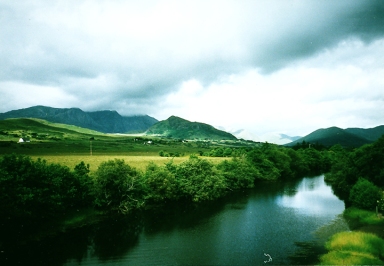 The first story in the volume is called “Cois Fharraige,” which used to be subtitled “or, By the Sea,” which is the meaning of the Irish Gaelic (Gaeilge) title. The poem that follows the story (“Ag an gcrosaire,” which means “at the crossroads”) stems from the same time period and experiences.

From 1995 to 1997 I studied creative writing, literature, history, and Irish language in the University of Notre Dame MFA program. (Actually, when I entered the program it was an MA but changed to a “terminal degree” at the end of my first year, but that’s another story…). When I told my roommate that I was studying Irish he first said “don’t the Irish speak English?” And then he added, “Gee, that’s going to improve your job offers” (or some such words).

But I was serious. Previously as an undergrad I had studied German in a language immersion program: 16 credit hours per week for 14 weeks, followed by four weeks in Germany. The impetus was to track down my German roots…which, I’m happy to say, I was successful at. So (I reasoned) since my ancestry is about three-quarters Irish, I should avail myself of the classes offered in Irish and attempt to track down my Irish roots.

Which is how I wound up in the Gaeltacht (the Irish-speaking areas of Ireland), outside Galway in western Ireland in the summer of 1996. I will say, first off, I had a great time. Not so sure my Irish improved (I’ve forgotten most of it, sad to say). But there were many times that I had mixed feelings. Partly the climate was to blame. It was 96 and humid in Chicago when I left; 55 and rainy when I arrived. What I had thought was a unique homestay chance turned out to be a huge moneymaker for the locals, with seven foreign students a house and boiled potatoes and salmon three times a day. Getting from the homestay house to the language school (Áras Mháirtín Uí Cháidin, run by the National University of Ireland, Galway, and na Bord Gaeilge) turned out to be largely a matter of timing; we could actually see the rain coming, sweeping in from the Atlantic like a curtain waving in the wind, which generally meant that we had less than 10 minutes to get to the school before we all got drenched. Conversely, when they had dried enough, the bushes on either side of the road would spontaneously burst into flame and then smolder for a few minutes. There were few trees and even fewer people. Rock walls and sheep crossing signs everywhere. A perfect place to write.

The short story was inspired by one of many trips we took to local “beaches.” (I say “beach” because that’s the best way to describe them, though you certainly wouldn’t see sunbathers and swimmers.)  As in the story, we would typically grab a few drinks from the local pub and get take away from the fishes and chips shack in the pub’s parking lot. The odd thing about the pub was that we foreigners (American, English, German, Dutch, Finnish, Swedish, Czech, Italian…) would always order Guinness or Kilkenny, while the locals all drank Bud (to make matters worse, the pub usually played only country western music, with occasional interruptions of Celine Dion, and the only Irish dancing was done by us…in performances arranged through the language school). But it was a fun place (“craic ‘s ceol”) and I had loads of interesting conversations there with visitors from all over Europe.

The poem is what I was scrawling into a faded yellow mini-legal-pad size notebook while sitting on an old rock wall outside my homestay house, when one of my homestay “mother”‘s sons came out to tease me. At the time I was conflicted — having expected to uncover my Irish roots, yet finding that I had little in common philosophically or personality-wise with most of the Irish that I had met —  but the teenager had thought I was writing a letter to my (non-existent) girlfriend. “I was coming to take the piss out of ye,” he said glibly. First time I had encountered that expression, as it turned out.

Ultimately I came to realize that searching in the lands of my ancestors for a sense of self was a misguided attempt to find meaning in my life. Chalk it up to inexperienced youth…but visiting Gaillimh (Galway), Sligeach (Sligo), Lough Corrib, Na Beanna Beola (the Twelve Bens) and  the Aran Islands remain treasured memories of the Emerald Isle.