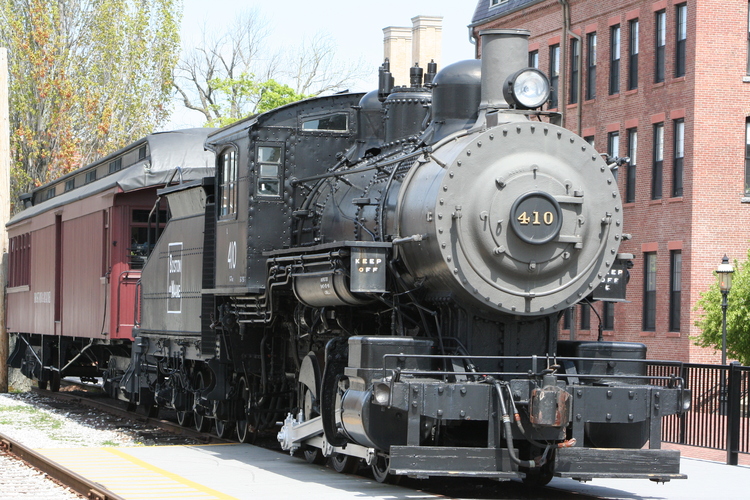 So where to start the family stories?

How about with a working man and the mighty engine that could (kill him)?

Railroad working is on all sides of my family forest. The Delaware and Hudson (D&H) ran trains through Troy up to Montreal and down to New York City (and many other cities in-between) until the 1960s. The main train station in Troy, Union Station, was a beehive of activity until the “urban renewals” of the 1950s tore down the downtown Troy area and sealed off Albany and Troy from the Hudson River by striking the I787 highway straight through the Capital District like a stake in its heart.

It’s only in recent years, in the 21st century, that the cities have begun to heal the wounds it received in those bleak years. So in order to understand why my great-great-grandfather died, you have to have a completely different picture in your mind of what a Troy City street looked like back then.

I live in Japan, which is entirely reliant on trains for public transportation, so I have a much clearer idea of how crowded things were back in 1928, when Trojans used the D&H and the Boston and Maine (B&M) lines to get to school, work, and play. 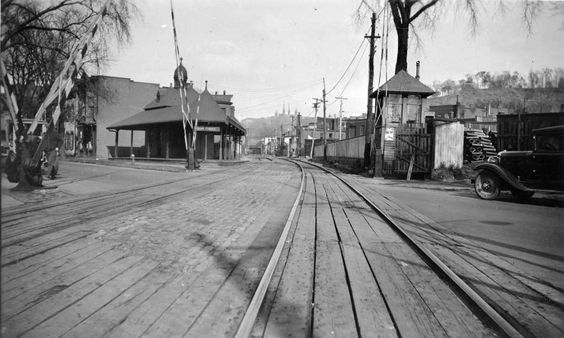 This is not the Ingalls Avenue crossing, but the Adams Street Station in 1929. A series of automated controls were installed after the fateful 1928 season, which saw increasing numbers of pedestrian deaths in a crowded urban landscape.

Now we have automated railroad crossings, operated by complicated computer-control systems, activated when an oncoming train passes over electronic sensors between the tracks. Back in 1928, the crossings were operated by hand.

By my great-great-grandfather’s hand.

It must have been a frigid morning on February the 24th, when he performed his daily duty of escorting gaggles of school children over the Ingalls Avenue railroad crossing. The children were likely headed to School 1, just a few blocks away (this school is now closed and is being turned into apartments in the poorest section of the city).

William Bushell was a flagman at the Ingalls Ave crossing, where he stood for years on end to prevent pedestrians from danger. But the wood slats over the tracks were icy, and just after he successfully guided the children to safety, he slipped and fell over the tracks. Just as a switching engine (like the one depicted above, from B&M in Lowell, MA) rumbled down the line and killed him.

Well, to be more factual, it decapitated him. And also cut off both feet and one hand. Newspaper reports in 1928 were apparently far more gruesome than modern day reports.

He was widely hailed in the Albany-Schenectady-Troy Capital District region as a hero, who sacrificed himself so that children could live. But really he was just doing his job, the job that flagmen and flag women do every day even today. 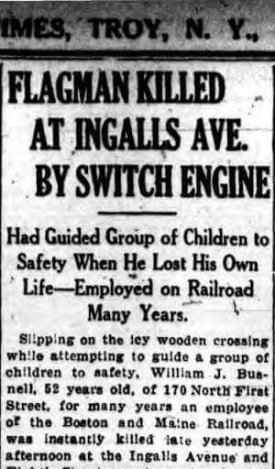 Incorrectly gives his name as “Busnell.” This also is part of family history—the utter lack of name consistency…

The scary thing is that the Troy Times the next day noted that his death was the “third accident of this kind…within the last two weeks,” despite that fact that Wllm was “one of the most careful employees of the Boston and Maine.”

The next year, New York dedicated $300 million ($4.2 billion in 2016 money) to upgrading railroad safety features to prevent such accidents…but the money dried up. And soon after the Great Depression hit.

And the Bushell (which was soon to be renamed Bushnell) family had no bread winner.

Growing up without a father figure set a trend for my family in the 20th century. And it started with William Bushell/Bushnell and his son Thomas.

More on the Bushell/Bushnells coming soon…