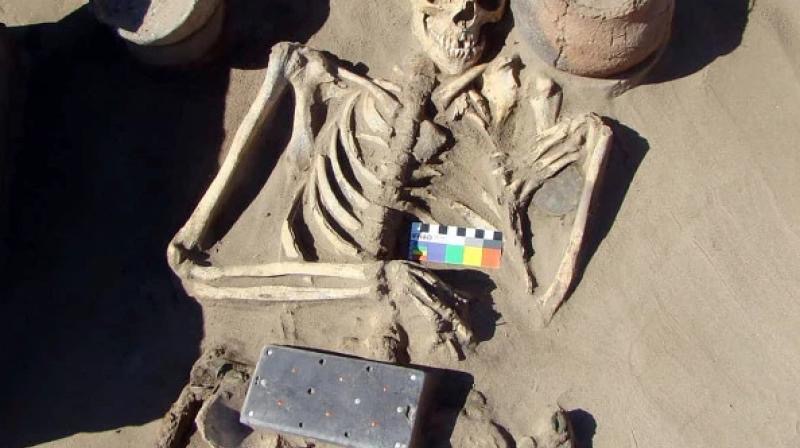 This is already a few months old, but I thought I’d finally get around to blogging about it: The “ancient iPhone” of “Russia’s Atlantis.”

Spoiler alert: it’s not one, and there was no such place. But that didn’t stop the “news” from spreading.

“Archaeologists discover a 2,137-year-old iPhone in a grave of a buried woman in Russian Atlantis,” blares the headline of one article.

“Archaeologists stunned by 2,100 year old ‘iPhone-like’ belt buckle found in Russia’s Atlantis,” screams a third. (Don’t actually click on this third one, unless you enjoy endless pop-up ads and videos that drain your actual iPhone battery.)

OK, OK, I get it. It’s clever. It hits all the right click-bait key words: iPhone. Atlantis. Russia.

But it’s crappy, sensational reporting like this that spreads fake news and disinformation around the planet, further dumbing down the human race.

Dozens of web sites did a quick copy-paste within a day of the initial science report, slapping on ridiculous headlines in a bid for attention (“Found in depths of ocean!” enthused the New York Post, “Incredible moment! Bizarre!” brayed the Daily Star.)

Granted, most of these sites are not exactly well known for their journalistic integrity.

But shouldn’t they be?

The archaeologists said it was roughly the size of an iPhone. Not an actual iPhone. One took a picture of himself holding the belt buckle to his face, like a phone, and then Instagrammed it. (THAT was what set off the fake news merry-go-round.)

But the thing looks NOTHING LIKE a phone. It’s a freaking piece of stone, covered in other stones. (One “news” site even stupidly said it was a piece of wood. It’s a piece of lignite. Stinky coal, basically.)

It was found near its owner’s waist, because it was a belt buckle (where else would it be worn?)

Just because you can hold an object in your hand doesn’t mean it looks like a smartphone.

If the archaeologist had posted a picture of the belt buckle held sideways (like, you know, an actual belt buckle), nobody would be going around crowing about how much like a iPhone it looks.

But the damage was done from the get-go.

Sure enough, it only took a few minutes after the initial post before Chinese Whispers started and swept the globe.

At least one web site skipped the “iPhone-like” description and went straight to “2100 year old iPhone.”

Others were even worse.

“Is this the Queen of the ‘Russian Atlantis’?” (No, Daily News, she isn’t. And no, Spain News, the archaeologists never said she was Queen of the Tuva.)

And, no, her real name probably wasn’t “Natasha.” That was a playful nickname given to her by the archaeologists. Nobody knows her real name. Nobody is 100% certain what position in society she had. She died around 100 BCE. There was no written language in Siberia then. Nobody knows for sure who she was. Nobody knows! Stop making s$#t up!

Honestly. I think we already have enough BS around about “ancient aliens” as it is. It’s enough to make me fear for the future of humanity.